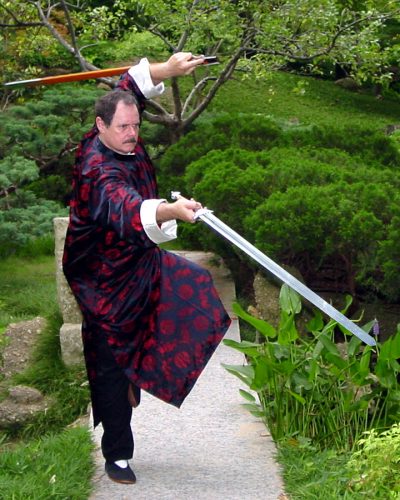 The Gompa offers two types of weapons training programs. The first is the traditional Chinese Gong Fu weapons programs and the second is a series of modern contemporary weapons training offered through the American Rangers Martial Law Enforcement Training Institute under their PKC tactical skills program.

(Scheduled by private arrangement unless listed in calendar)

Classical Chinese internal martial art weapons training as taught at The Gompa develops patience, discipline, agility, hand-eye coordination, speed, timing the ability to project energy or Jin into an object and a respect for the rights of others.

Our weapons programs are not taught as fancy demonstration forms. We specialize in instructing the actual combat arts as used by Chinese masters who depended on these weapons for “real world” self-defense. Courses include combat principles, stance, and speed drills, fencing with the weapons and how to adapt the weapon to your style of internal art. Each weapon can be learned, as Chinese master bodyguards would use it in Baguazhang, Xingyiquan or Taijiquan.

Each weapon is taught as realistic self-defense just as they were used by the Li family in their work as famous Baobiao (bodyguards) in Sichuan province and later in service to the army of General Chiang Kai-shek. No palm prerequisite is required, however the more skills one has in the Baguazhang palms the more deeply we can delve into the practical methods of each weapon.

THE CHINESE ART OF WEAPONS 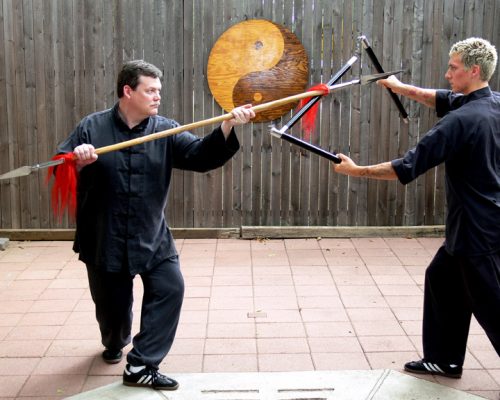 It is not surprising that a nation with the martial history of China should have spawned an almost endless number of weapons and weapons systems. Most Gong Fu schools have weapons systems that embody the distinctive features of the boxing styles themselves. This is as it should be since a weapon is actually only an extension of the hand. Other weapons systems developed independently without association with a boxing system and were later adopted by the boxing schools. On Mainland China there are more than four hundred separate weapons forms employing currently more than fifteen different types of weapons.

Chinese history rings with the sound of weapons, swords, spears and the twang of a bowstring. In five hundred BC, Confucius was enjoining the Chinese to practice archery as a disciplined training in manners and morality. In four hundred BC, armies in China were composed of swordsmen spearmen, archers bowmen and crossbowmen. Spears were not thrown but were used as thrusting and cutting implements providing extended reach.

Weapon play had its own literature as early as the former Han Dynasty (206 BC to 8 AD) when “Thirty-eight Chapters on Sword Play” was published. This work was later lost. Subsequently during the Tang Dynasty weapons experts abounded. The famed Chinese poet Li, Po wrote that he was exceptionally keen of the art of swordplay. He studied swordplay from the age of fifteen. Another celebrated Tang poet was so adept at archery that he was able to shoot down a flying bird with a bow and arrow. Even women became very proficient in the use of certain weapons. Tu Fu wrote a poem praising the certain sword work of a woman. Women played a great part in the sword arts of China. The Madame he wrote about was named Kung Sun* She was reputed to be a great master of the sword. Part of the poem goes like this:

“Her swinging sword flashes like nine falling suns shot by Yet the legendary bowman; she moves with the force of a team of Dragons driven by the gods through the sky; her strokes and attacks are like those of terrible thunder; and when she stops all is still as water reflecting the clear moonlight.”

In the same period another poet wrote of a famed general who was an expert with the weapon called the Dao or knife which in the west is called the sabre. This fellow used twin sabers.

“General Peimin is like a flying horse; he turns to the left, then dashes to the right. He tosses his sword hundreds of feet into the sky. It flashes like lightning amid the clouds. Then, leisurely, he stretches out his hand holding the sheath to receive it. The sword falls through the air right into the sheath. Thousands of spectators are held spellbound.”

Becoming Calm Through Weapons Training
Another interesting point is that among scholars and martial arts masters, not soldiers the skill with weapons was considered to be a sort of moral training. When one was highly skilled philosophy and also in the offensive and defensive arts with weapons one was more likely to be kind and tolerant of others. The theory is simply that when one has master his or her own apprehension about being harmed by others then the cause of aggression which is most often fear tends to recede. Training in weapons also is highly aerobic and so is beneficial to the cardiovascular system. Ancient masters used these methods to increase tendon and joint strength as well as developing the ability to focus energy or Jin outside of the body. Therefore those learning the hand to hand methods of Gong Fu would greatly benefit from these added skills provided by weapons training.

The Double Edge Sword
Sword Methods taught by Dr. Painter originated on Emei San Mountain in Sichuan province as a part of the Daoqiquan family system. The Jian (sword) is a refined weapon using basic movements that can be transformed into hundreds of defensive and offensive techniques. There are two courses in this series. The first is the Xingyiquan five element sword and the second is the Jiulong Baguazhang long sword art. These are not fancy demonstration forms. Our program instructs the basics or actual combat sword principles. These methods were used effectively in life and death combat for over three hundred years by the Li family in China.

Three Section-Staff
The three section staff is a wooden stave consisting of three parts, with the end section of each outer leg connected to the middle segment by metal rings. Each wooden section is made of a very hard wood with the tips being covered by brass or iron. It can be used against swords, spears, knives or multiple opponents. It is used as a flail with one or both ends or as a long three-section whip. The staff held in both hands the staff becomes two short clubs and a shield, reversed it can catch, lock or break arms, legs and necks with relative ease. Students must supply their own weapons for training.

Jiulong Baguazhang Staff
The staff appearing to be only a simple stick about six feet long comes alive like a coiling dragon in the Jiulong Nine Dragon Eight Diagram Palm Staff method. This program teaches defensive and offensive basics for using the Li family Bagua staff in actual combat. No fancy show forms here, just practical down to earth combat principles using a long stick for self-defense against armed or multiple opponents. Students will supply their own weapons subject to approval of the instructor. 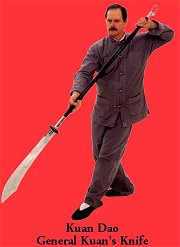 General Kuan’s Knife
The large long handled saber is a weapon designed to be used in medium to long range defense on the battlefields of ancient China. Known as the Kuan Dao or General Kuan’s knife the weapon takes balance, strength and timing to be wielded properly. Dr. Painter specializes in the Bagua Kuan Dao methods of Li, Zhang Lai known as the Silver Dragon’s Wing method. Students will supply their own weapons for training. 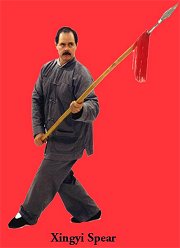 Xingyiquan Spear
The Spear methods taught by Dr. Painter originated on Emei San Mountain in Sichuan province as a part of the Daoqiquan family system. The Mao (spear) is a direct and subtle weapon using only five basic movements that can be transformed into hundreds of defensive and offensive techniques. This course is not a fancy demonstration form it teaches the basics or actual combat spear principles used effectively for over three hundred years in China. We also offer the Baguazhang spear and the double ended Baguazhang spear combat courses 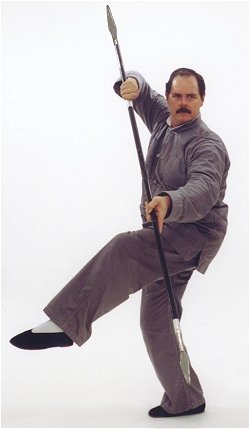 Double End Spear of Jiulong Baguazhang
The Bagua-Lung Mao: The eight-diagram dragon spear is often called the king of weapons. The Baguazhang spear is unique in that it has two blades at each end of the shaft. It is used for thrusting and cutting. The Jiulong Mao creates a wall of whirling steel around the master as he spins, turns and glides in his circling patterns. This method of Jiulong Mao is said to have originated on Emei San Mountain in Sichuan province as a part of the Daoqiquan family system. The Mao (spear) is a direct and subtle weapon using the eight basic movements of Baguazhang that can be transformed into hundreds of defensive and offensive techniques. This course teaches the basics or actual combat spear principles. Students should be familiar with Baguazhang circle walking basics. 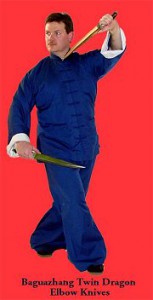 Jiulong Elbow Twin Knives
The Li family method of using two large Bowie type blades in a direct and practical edged weapon method using only the basic movements of Jiulong Baguazhang that can be transformed into hundreds of defensive and offensive techniques. Teaches the basics or actual combat principles used effectively for over three hundred years in China. Students should be familiar with Jiulong Baguazhang Heaven Palm Postures. No one under eighteen may register for this course.

Bagua Iron Fan
A truly beautiful but effective weapon the iron fan is an ancient weapon with modern urban combat applications. It can be used my men and women alike for self-defense. Students who learn the fan can make use of a short stick or even a pencil in the same way the fan is used to strike pressure points or lock joints and take an attacker down. (Student must supply practice weapon) 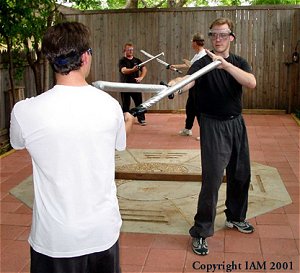 This course teaches you how to use the Chinese sword properly for realistic combat. Also included are sport fencing rules and judging methods for tournament play. Each student who completes the program will receive a judges certification by the Chinese Weapons Sparring Association.

These programs are based on both ancient and modern weapons tactics as used by Chinese and USA police, bodyguards and military for self-protection. For all of out PKC tactical combat programs students must be of high moral character and submit to a background check before being allowed to attend these workshops or private instruction. 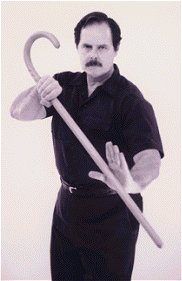 Cane and Stick Combat
The walking cane makes an ideal defensive tool for the walker or city dweller against both man and beast. This program teaches methods of using a standard cane to dissuade even the most determined attacker. We will show you what works and what does not so you can be confident in your system.

Includes: Knife defense, multiple opponents and how to select the best cane for defense, defensive blocks, pressure point areas for striking and jabbing with devastating power.

In addition to our regular classes, we send free internal arts lessons and information on programs and special products only to our subscribers. It's free to sign up and we'll never spam you or share your email with anyone.