This art is taught through our Sister School in Saskatoon, Saskatchewan.
https://www.orchardkungfu.com/tibetan-snake-boxing 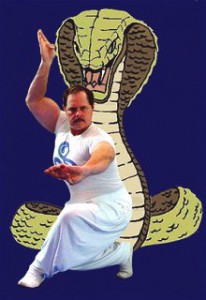 Tibetan Snake boxing is an external martial art system practiced exclusively by the Li family with the main focus on fighting while kneeling, sitting, rolling or lying on the ground. The Snake Boxer, through tumbling, rolling, leaping and coiling, controls the balance of his opponent by striking or locking vulnerable pressure points with devastating effectiveness.

Snake Boxing does not make use of submission holds like other ground fighting methods. It prefers to attack and disable the opponent through breaking joints, disabling muscles and tendons or paralyzing with knockout blows to pressure points.

This method was reputedly created in Tibet over four hundred years ago by a monk who later taught the method to Lama Zurdwang, instructo 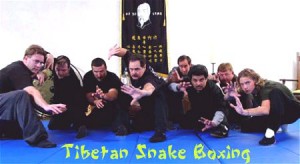 r to the Chinese martial arts masters the Li family. The unusual method of ground fighting proved highly effective for their work as professional bodyguards in China.

This is an ideal skill to learn for those dangerous moments should you fall, be thrown or find yourself in a sitting or reclining position. It is also a highly aerobic exercise that builds strength in the legs and back while activating the Bladder meridian points for improved health. The basic course lasts for three months.

The origin of Snake Boxing

The following legend recounts the founding of the art. I was told the story many times by my teacher Li, Longdao who learned the method from his father. I can make no claims to the historical accuracy of the story. All that I can say is that I am recounting the tale as it was told to me when I was a young boy of 15.

Some time around the late 1500′s a small and quite unimpressive monk of a small and unimportant Lamasery near the border of Tibet was entrusted with the duty of carrying a valuable offering from the peasants of the nearby village to his lamasery high in the mountains. On his precarious journey up the narrow mountain path, bandits, who severely beat him and cast him over the side of the cliff, attacked the little lama. He fell into a grassy valley below where he was left for dead. Some small bushes near the edge of the valley, which bordered on a stream, broke the lama’s fall.

He lay unconscious for a day and a night. Sounds of a struggle revived him. In a state of semi-consciousness, the monk became aware of a ferocious battle being carried out near the bank of the stream where he lay.

A small monkey and a King Cobra were battling for supremacy and territorial rights. The ape fought with a combination of rolling, tumbling, stamping, grabbing and ripping with his strong fingers, jumping and eluding the quick whipping actions of the cobra, while the cobra evaded the attacks of the ape with his supple body. The serpent used his tail to pull the monkey off balance. As the ape’s balance was lost, the great serpent would strike down from above with bared fangs. The monkey dodged with deft skill left and right to avoid the attacks. Neither adversary seemed to be able to get the upper hand due to the rocky terrain. The serpent would slither among the rocks and strike out at the monkey, and the monkey would leap atop the rocks to avoid the lashing tail of the serpent.

Lapsing again into unconsciousness, the bruised and beaten lama had a dream. In this dream Tara the goddess of compassion looked with favor upon him. She gave him command of the energies of the serpent and the monkey. In his dream the bandits on the precarious ledge again attacked the lama. As he was attacked, his arms were transformed into hooded cobras, his legs became the tail of the cobra, falling on the ground and rolling and tumbling as the monkey had done, he was able to defeat his attackers, by tripping and pulling them off-balance. As the attackers fell, the cobra-like arms would strike the vulnerable places of the body, instantly paralyzing the attacker.

Disciples from the lamasery found the dazed and bruised monk by the side of the stream and cared for his wounds. When he recovered, he returned to the spot in which he had witnessed the great battle. There he found and trapped the giant King Cobra and some time later he trapped a young monkey.

For many years he studied their movements and its supple nature. He noticed that, although appearing to be quite slow, the great snake was able to, evade thrusts from spears and swords easily. From watching the small monkeys that scampered about the lamasery, he was able to develop a system of self-protection based on the, movements of these two creatures.

With his new system he was able to defeat all comers quickly and easily, but he was restrained from teaching his art to all save a few, as the Abbot of the lamasery found his system to be deadly and highly dangerous. So this particular system, known as Tibetan Snake Boxing, was taught only to those lamas who would be leaving the lamasery for extended periods of time who would need an ultimate system of self defense while traveling on the bandit-infested highways and roads. The system was particularly useful on uneven ground, sloping ravines and narrow mountain trails and other places where the footing was treacherous.

One of the monks taught this method was Lama Zurdwang. Zurdwang was leaving the Gompa on a trip to study the methods of Chinese Daoism and Buddhist methods at the Emei mountain region. The journey and adventures of Zurdwang that began around 1560 AD and lasted for over twenty years as told by Mr. Li were quite extraordinary and could probably fill several volumes. Zurdwang never returned to the Gompa of his early training in Chamdo Tibet. Instead he  traveled through China staying at many monasteries and temples. He eventually gave up his Tibetan Buddhism and become a wandering Daoist.

In 1580 after studying what are believed to be the rudiments of early internal Chinese martial arts Zurdwang created the Wu Guan Bu Neigong Quan style (5-circle method 6-step internal power boxing).  These methods included numerous martial and Daoyin forms including methods he learned along the way most notably Gtumo (inner heat) the Blue Heron boxing and Snake Boxing.

In 1600 AD he is reputed to have been destitute and almost starved during the long Sichuan winter. It was then that Zurdwang came to live with the Li family as an instructor. Zurdwang became a teacher of the Li family in Daofu China, Sichuan Province. Here he taught the children and parents reading, painting, poetry, herbalism and his martial methods of the Five Circles, Six Stances, Snake Boxing, Heron Boxing and Four Virtues. It was from the knowledge of Lama Zurdwang that the Li family came into the body guard profession and made their fortune in the world.

Is This History True?
Personally I have reservations as to reality of this story up until Lama Zurdwang Rinpoche enters the picture for a number or reasons. First, the main religion of Tibet is Tibetan Buddhism. Buddhists especially the Tibetan strain take vows of non-violence, it is one of the founding principals of their belief. So to think that a Lama would create such a devastating and often merciless method of self-defense is not logical.

Second, the Thirteenth Dalai Lama has publicly said that there are no systematized martial arts indigenous to Tibet and especially none that originating from Tibetan Buddhist practices. The Tibetan people have prized peace and meditation over violence for thousands of years. So why did my teachers tell me the legend if it were not true?

I believe he himself believed it to be true as it was what his father told him and what his grandfather told his father. My guess is that it was a good Chinese military tactic right out of the famous General Sun Tzu’s book “The Art of War.” One way to keep the enemy nervous and on edge is to never let him know your plans and to make him believe you possess a secret weapon or skill that he cannot stand against.

Tibetans Lamas were thought to be skilled in mystical powers. They were thought to have developed their Lung (Qi / internal energy) to such a high degree that they could run for miles without becoming winded (Lung Gompa), survive in sub-freezing temperatures dressed only in thin cotton garment (Gtumo) and many other mystical feats. If it were thought that one was in command of such knowledge and there was also a secret Tibetan martial method unknown to the Chinese martial arts societies spreading such misinformation could prove a tactical advantage.

I suspect that it may have been Lama Zurdwang Rinpoche who created the method himself along with the other reputed Tibetan system used by the Li clan, Blue Heron boxing. In all probability he developed these methods after he had studied in China for many years and had embraced the Daoist way of life. All of this is conjecture based on a legend.

Reality is that history is only a pale shadow of the truth. Tales told and handed down become distorted and exaggerated with time. What we can know is that the system exists today no matter what its origins. It is a powerful method of combat designed to stand-alone or to augment other martial systems by the use of kneeling and ground tactics. I continue to refer to it as Tibetan Snake Boxing because that is the name placed on it by my teacher and who am I to change his wishes.

Learn About Our Online Programs 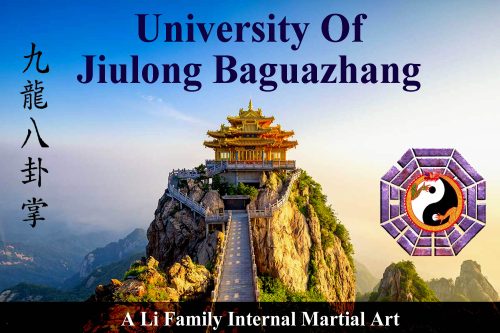